On August 5, the Senior Director of Wenzel Meinl GmbH and Anton Meinl KG, Anton Meinl, celebrated his 65th birthday in Geretsried. Born in 1922 into a traditional Graslitz family of musical instrument makers, the Daniel Langhammer Factory, he served his apprenticeship with Bohland & Fuchs of Graslitz before studying at the State Technical College of Brass Instrument Making. Training came to a halt in 1941 due to the outbreak of World War II. After 1945, Anton Meinl first found casual employment in a number of different music retail stores before establishing the family business in partnership with his father in Geretsried/Southem Bavaria in 1948. Wenzel Meinl GmbH originally had to make do with an old ammunition dug-out which eventually became the site for the present-day factory employing a staff of over fifty and equipped with modern production facilities.

Anton Meinl passed his master craftsman's examination in 1952. Two years later he received his first gold medal at the International Trade and Handicrafts Fair held in Munich. This was followed by a whole series of further awards, most recently in 1985. For many years, Anton Meinl was on the Advisory Board of the BDMH (German organization of music instrument producers) as well as serving on the committee of the Federal Guild of Musical Instrument Makers. He still acts as an official authority on the sector of brass instrument making. In the regional guild for Upper and Southern Bavaria along with the Upper Palatinate, he acts as chairman and official authority, a capacity in which he has rendered service on the trainees' examining board for over thirty years. Training of young instrument makers is also a sphere in which he is actively engaged at his own factory. His untiring efforts to provide new entrants to the trade with first-class professional training have won him, or to be more exact his apprentices, numerous prizes and awards at the German handicrafts contests staged on a regional and national level.

His accomplishments in this field earned him official recognition in June 1984 by the President of the German Federal Republic. Other honorary activities performed by Anton Meinl include services rendered on the guild committee responsible for conducting examinations for skilled instrument makers. He also worked on the revised regulations governing vocational requirements applicable to the trade of brass instrument maker in conjunction with the Federal Music Research Institute besides establishing the regulations for the examination of skilled instrument makers.

As a designer, Anton Meinl has been responsible for a number of innovations applied to the manufacture of brass instruments. One notable example was the fitting of socket joints, now a standard feature on all instruments. He also introduced many stimulating ideas and detailed improvements in the sector of tuba making. Working in collaboration with a professional musician he thus developed the B-flat/E-flat key-switch of commutation horn. Constructing orchestral instru­ments on made-to-order principles is one of his specialties.

Last year, the Berlin Scientific Advisory Board, acting on the recommendation of Herbert von Karajan, sponsored the design of a tenor tuba for authentic perform­ances of Richard Strauss’ works, a task assigned to Anton Meinl. Having retired from executive ranks, Anton Meinl is now able to devote his entire energy and resources of inspiration to design, applying craftsman skills and ideals to the improvement and refinement of the instruments he makes. With luck, Meinl Weston will benefit for many more years from this craftsman's experience and wisdom!!

Born in Graslitz in 1922, Anton Meinl attended school there from 1928 to 1936, following which, he took a 2 year course at the Technical State School for Musical Instrument Making. After a 3 year apprenticeship, his studies were interrupted by induction to the military service in 1941.

With no opportunity to return to his home in Graslitz, and not knowing what had become of his parents, Mr. Meinl settled in Austria following his release as a prisoner of war in 1945. He worked there for 2 years as an instrument maker and repairman, until he located his father, who had re-established his brass making business in the town of Geretsried. Joining his father's enterprise in 1947, Anton Meinl continued his studies at night courses and passed the examination for his master's degree in 1952.

A highly skilled craftsman and excellent teacher, Anton Meinl has contributed much to the development and improvement of tubas. He was the first to use the hydraulic system to bend tubing for Tubas and the first to use steel ball action on rotary valve Tubas. His cutting patterns became famous for its projection and core. The configuration of slide tubings of the Meinl-Weston Tubas has contributed significantly to the efficiency and response of the instruments.

Anton Meinl collaborated closely with the late William Bell, with whom he developed several models in the early 60s, then also Rex Conner and Joe Novotny of the New York Philharmonic, while he worked in Germany with players like Lueghausen and Pröpper, but also kept an open workshop for everybody including Arnold Jacobs or Floyd Cooley and Sam Pilafian. 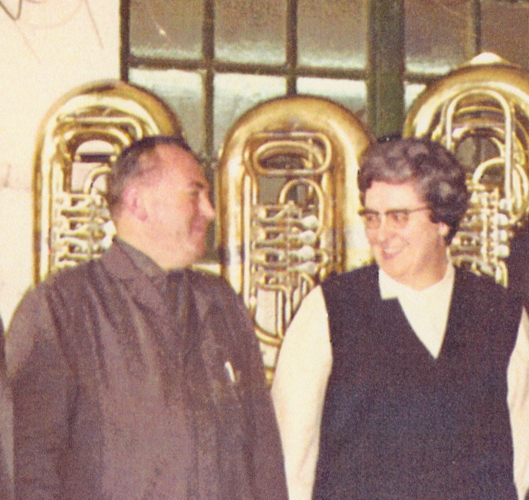 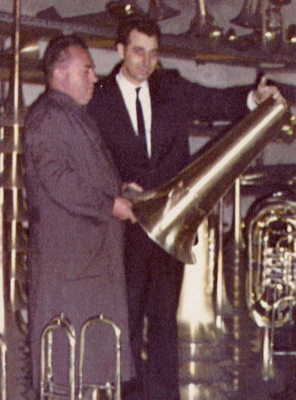 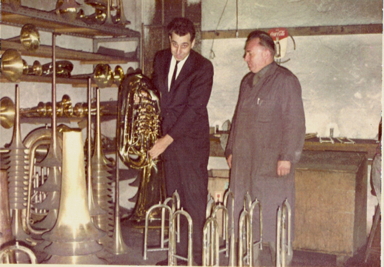 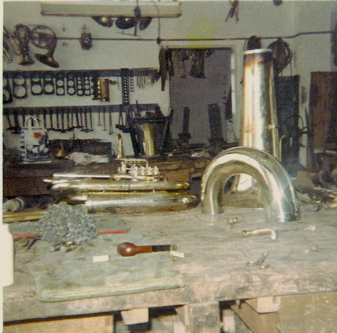 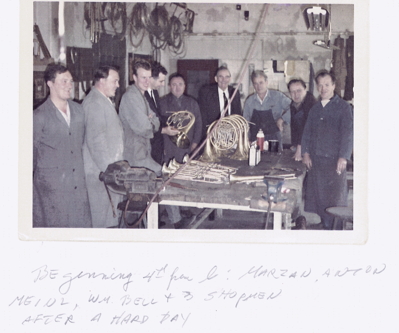