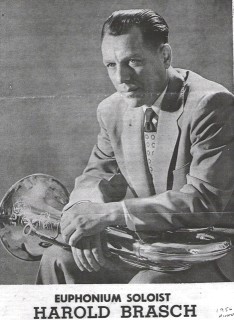 Brasch performing a solo with the Fred Marzan Band

Harold Thomas Brasch was born in San Pedro, California on 7 October 1916. He was the son of Bruno and Edith Brasch and he grew up in a family, which included a brother, a sister, and, off and on, a dog or two. He was very active in scouting, earning many merit badges, winning aards in sports such as swimming, acquiring red cross life saving ratings, etc. His earliest musical experience was as bugler of his Boy Scout troop. Much later he served as a scoutmaster.

On his fourteenth birthday young Brasch was given a $50 student model trumpet, and this included ten free lessons. A year later, on the advice of his bandmaster, he changed to the baritone horn. He made rapid progress and exhibited such natural talent and ability on this instrument that while still a high school student he appeared as guest soloist with numerous college bands in the southern California area and with the long beach municipal band, then under the direction of the world famous Sousa Band cornet soloist, D. Herbert L. Clarke. He studied with Dr. Clarke for some time and Dr. Clarke thought so highly of Harold's playing that he wrote a letter of recommendation to Lt. Benter, the leader of the U.S. Navy Band.

Finally. In January 1938 Harold Brasch realized his amibition - he joined the U.S. Navy Band at the Navy yard in Washington, D.C. In a matter of months he was put on the principal euphonium chaiar and started playing solos with that world famous military band. For the next eighteen years, Mr. Brasch thrilled audiences all over the United States and Canada with his wonderful solo work on many Navy Band tours, various concert engagements such as the Canadian National Exhibition of Toronto, Canada, radio broadcasts, etc.

During his eighteen years with the U.S. Navy Band, he played countless band "jobs" in and around Washington, D.C.; ceremonies of all kinds, concerts (indoor and outdoor), radio broadcasts ("the Navy Hour" was a famous one), street parades (inaugural parades), honor guards, reviews, military funerals, White House engagements, etc.

Harold Brasch retired on 1 March 1956 with over twenty years in the U.S. Navy. From his years in the US. Navy Band he had become a well-known name in the world of military and concert bands. Many euphonium players in Washington, D.C. and through the entire U.S.A. felt that he was the premiere euphonium soloist of the world.

Soon after retiring, Mr. Brasch began appearing as guest soloist, guest conductor, and clinician all over the U.S.A. and Canada. For the next thirty years, he was extremely active in these areas of musical performance. He set up his own concert tours, acting as tour manager, advance man, and performer. He spent weeks every year at various music camps teaching, conducting, playing in the band, and playing solos. He wrote articles,which appeared in the leading band music magazines of the United States, Canada and England. He produced and distributed a number of LP discs of his solos. He arranged many technical solos, serenades, songs, etc. for euphonium with piano and/or band accompaniment. During this three-decade period he did more to publicize the euphonium as a solo instrument than any other person in this country. Through his efforts alone, the euphonium became a legitimate and a popular musical instrument in the U.S.A.

Not only did he write many articles about euphonium playing, but also Harold wrote a tutor, which is a classic and is one of the most popular and widely used methods for euphonium in use today. Titled "The Euphonium and Four Valve Brasses - An Advanced Tutor." This method book covers aspects of euphonium playing found nowhere else.

Although Harold Brasch could be considered a consummate musician, he had many other talents. He was more than a "jack of all trades." He was closer to being a "master of all trades." Throughout the years he did much work on and around his home in Arlington, VA. The various trades involved include that of mason, electrician, pipe fitter and carpenter. A trade in which he definitely was a master was that of organ technician or artisan. For thirty or more years, he worked off and on for a pipe organ company, which did everything with organ except manufacture them. Harold dismantled and installed pipe organs. He repaired and adjusted organs. He tuned organs. He could do everything to a pipe organ and he could do it very well, indeed. He got to know literally hundreds of churches, chapels, schools, etc. in the area of Virginia, Maryland, Pennsylvania and the District of Columbia.

Eventually, Harold gave up the organ job, he stopped touring, and he cut back on his solo spots. However, he continued teaching at the International Music Camp in North Dakota, one of his favorite musical jobs. He liked to work with young people and teaching them music was one of his particular specialties. Another job he never gave up was his work in his church. A long time church worker, he devoted much time and effort in the music of the church forming various musical groups, conducting them, playing in them and soloing with them. He even had a brass band and this was a very busy musical group.

In 1974, a new band was formed in the Washington, D.C. area. It was called the National Concert Band of America and it is made up of, primarily, retired and former members of the four great service bands of Washington, D.C. - the Army, Navy, Air Force and Marine Bands. Harold joined this band in 1975 and was a driving force in the life of the organization, serving as a director, soloist, principal euphonium player, and doing much valuable work for the group. He spent nine years with the fine band, making two trips to the Canadian National Exhibition of Toronto, Canada, playing in many concerts, soloing countless times, recording a number of solos, and participating in many recording sessions by this popular concert band.

On 7 October 1984 during a rehearsal of the National Concert Band of America, the members of the band suddenly broke out into the strains of "Happy Birthday to you." You see, it was Harold Brasch's 68th birthday and he was both surprised and pleased by this small token of affection. A short time later Harold was stricken with a massive heart attack on Sunday, 28 October 1984 and he passed away on Thursday, 1 November 1984 at the De Witt Army Hospital, Ft. Belvoir, Virginia. He was buried in the Arlington National Cemetery in Virginia.

-from a handout at the 2016 ITEC Brian Bowman Clinic

The text Mr. Brasch authored, The Euphonium and Four-Valved Brasses, (self-published in 1971) is among his important contributions to scholarship, and he is also responsible for introducing the British compensating euphonium to players in the United States.    Mr. Brasch was given the Lifetime Achievement Award posthumously at the ITEC held in Bloomington, Indiana in 2014.

Harold T. Brasch (1916 – 1984), a nationally acclaimed euphonium soloist began his music career in a Boy Scout Troop. On his 14th birthday, he was given a $50.00 student-model trumpet with ten free lessons and attended San Pedro (California) High School. A year later, Harold switched to euphonium on the advice of his bandmaster E. A. Jarvis. While in high school, he appeared as soloist with numerous college bands in concert, and with the Long Beach Municipal Band, Long Beach, CA, under the direction the late Dr. Herbert L. Clarke. In 1936, he was admitted into the U. S. Navy Band, Washington, D.C. on the strength of a letter from Dr. Clarke. Brasch's tenure of 20 years in the U.S. Navy Band, his technical mastery of the euphonium, the beauty of his tone and superb musical craftsmanship, places him indisputably among the greatest euphonium players of all time. Harold T. Brasch became the acclaimed "Mr. Euphonium" with his many performances on every major radio network in the U.S.A; as featured soloist on the Navy Band Concert Tours and at the National Concert Band of America for the Canadian National Exhibition. He appeared as guest soloist with high school bands, college/university bands, civic bands, Salvation Army Bands, and was the euphonium soloist/teacher at the International Music Camp from 1960 - 1984.