Instrument design and manufacturer; known for the Willson 2900 compensating euphonium

Periodically, the International Tuba Euphonium Association recognizes individuals who have made significant and distinguished contributions to the euphonium and tuba through performance, compositions, education and/or the music industry. A few such individuals have been William Bell, Brian Bowman, Leonard Falcone, Arnold Jacobs, Rich Matteson, R. Winston Morris, Daniel Perantoni and Harvey Phillips.

At the 2002 ITEC Conference in Greensboro, North Carolina, Willson founder, Willy Kurath became only the third member of the musical instrument industry to be recognized as an ITEA Lifetime Achievement member.

Professor Scott Watson of the University of Kansas stated, in reading the citation, “In recognition and appreciation for a lifetime of significant contributions to the instruments of the Tuba-Euphonium Family. “It is the work of craftsmen that makes it possible for the technical dreams of musical artists to become a reality. The quantum leap in the artistic standards of our instruments could not have been possible without equal improvements in the design, production, and world-wide distribution of instruments that could voice our inner-most musical dreams and ideas. Instruments designed handmade by Willy Kurath Sr. have made these musical dreams come true.”

“The 1990s brought an exciting number of Kurath designs to the tuba world, many developed with consultation of such tuba artists as Marty Erickson, have also greatly increased the number of superior artist level instruments available to the tuba playing public. Recent designs of E-flat, F, and Orchestral CC Tubas have shown that Willy Kurath is an ‘Artist Craftsman,’ one who has dedicated his entire career to designing instruments that go far beyond what is standard for sheer simple profit.”

In the early part of the 20th century, euphonium players didn’t have an alternative. One brand of instrument dominated the market and that’s what every serious player purchased.

Enter Willy Kurath and the Willson Company. In his presentation speech, recognizing Mr. Kurath with ITEA’s Lifetime Achievement Award, Past President Scott Watson stated, “His desire was to build a company that was sensitive to the needs of the professional player. It was in 1974 that Willson and Willy Kurath would make their name forever associated with euphonium instrument design. At this time, Mr. Kurath worked with virtuoso Brian Bowman in the development of a new euphonium design, later to become the famed Willson 2900 series euphonium. This euphonium design is still the choice of legions of professionals world wide after some 28 years in production. The instrument’s tone, free blowing characteristics, and excellent intonation were a large improvement to the world of euphonium manufacture.”

Through the years, Mr. Kurath has followed the advice of Dr. Brian Bowman and many other respected professionals that have become dedicated Willson instruments. Although a number of companies have developed respectable instruments, Willson has been able to hold its own.

As the exclusive North American Willson distributor, we hear comments, like, “Brand X is too large,” … “Brand Y’s sound is generic. It doesn’t have a character of its own,” … “Brand Z does not play evenly throughout the whole range.”

Each time Willson has come up with a proposed major change, a prototype has been built and sent to DEG for testing and comments by Dr. Bowman, who has spent several weeks test playing the instrument. Occasionally, changes have been made and incorporated into the design of the model 2900. More often than not, however, the design has been left “as is.”

Occasionally, a new model has been developed and added to the Willson line. Such has been the case during the 1990s with the development of the models 2950 and 2975.

Realizing that some musicians prefer a larger instrument, Willson introduced the model 2950 in the 1990s. Although the basic bore size at the valve section is the same as the model 2900, the 2950 offers a large bore mouthpipe and tubing throughout, bass trombone mouthpiece receiver and a 12-¼ inch bell diameter. Model 2900 continues with a medium bore mouthpiece and tubing, medium sized European mouthpiece receiver and an 11-½ inch bell diameter.

The standard 2900 continues to be the more popular of the two instruments among professional Willson playing euphonium specialists. Both the 2900 and 2950 are excellent instruments, made with great craftsmanship and both play very well.

Although a wider choice of mouthpieces is available for the 2950 with its bass trombone receiver, there are also several choices of mouthpieces available with intermediate European shank for the 2900. Some of these include Willson 51DEU (provided with the 2900); Brian Bowman BB1EU, BB2EU, BB3EU, Bach 5G, Schilke 51D, various Perantucci mouthpieces with shank B, and Steven Mead SM3M and SM4M.

The majority of professional Willson playing euphonium specialists feel strongly that the “true euphonium” (medium or intermediate size European) shank contributes greatly to the euphonium sound. Does it make sense to commit several thousand dollars to a euphonium purchase and then choose a model based on being able to use the mouthpiece on a trombone?

Willson model 2975 euphonium also came on the scene during the 1990s. Although the vast majority of serious euphoniumists prefer the 3 on top, 1 on the left side valve configuration, there are those players who like the 4 in a row, front action model. This includes tubists that double on euphonium and players who have played the three or four in a row configuration for years and don’t wish to change. Model 2975 is built with a medium bore size, 11-½ inch bell and has a bass trombone mouthpiece receiver.

The important thing to remember when choosing an instrument that you will commit several thousand dollars to, is that the instrument is a tool that should help you to do the job that you want to do, not hinder you. No instrument is perfect. Make a list of the various performance aspects. If possible, visit one or more of the stocking Willson dealers … and/or try to attend conferences where the instruments are on display and available to try. Take advantage of the experience of respected professionals. Take time to find out what the majority of fine players are playing and why. 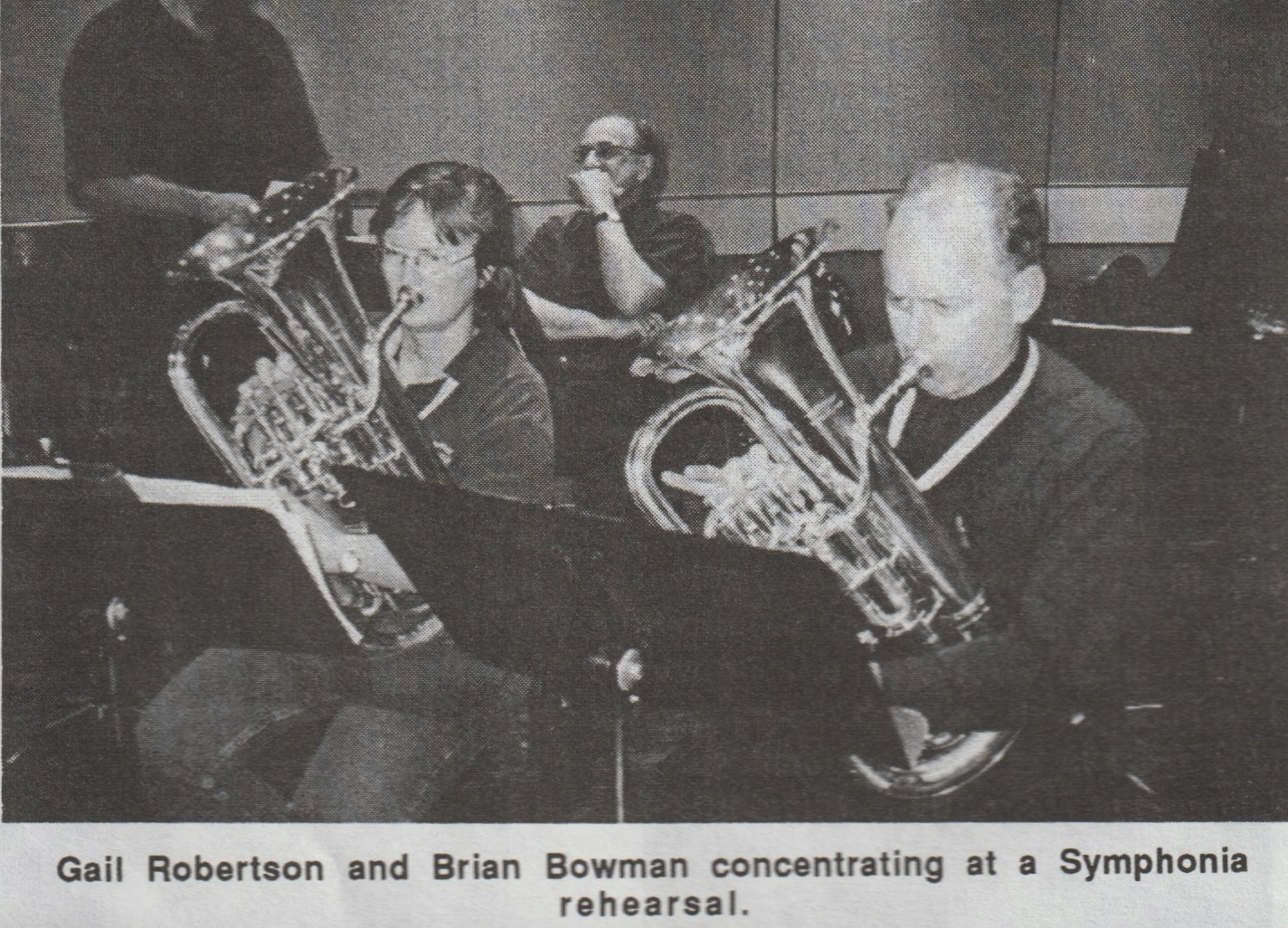 Pictures from the Fall 2002 "The Willson Mouthpiece"