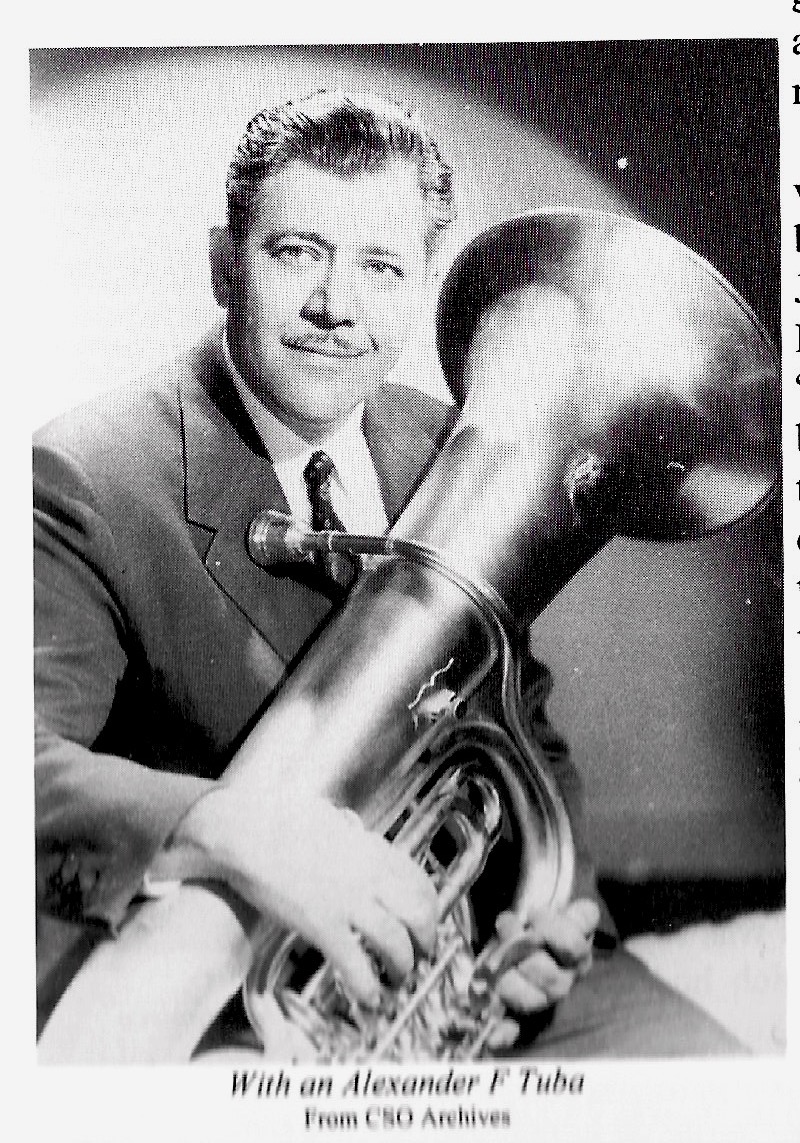 Photo from a Holton Brochure, circa 1958

Arnold Jacobs (1915 – 1998) was born in Philadelphia on June 11, 1915 but raised in California. The product of a musical family, he credits his mother, a keyboard artist, for his initial inspiration in music, and spent a good part of his youth progressing from bugle to trumpet to trombone and finally to tuba. He entered Philadelphia’s Curtis Institute of Music as a fifteen-year-old on a scholarship and continued to major in tuba.  After his graduation from Curtis in 1936, he played two seasons in the Indianapolis Symphony under Fabien Sevitzky. From 1939 until 1944 he was the tubist of the Pittsburgh Symphony under Fritz Reiner. In 1941 Mr. Jacobs toured the country with Leopold Stokowski and the All-American Youth Orchestra. His was a member of the Chicago Symphony from 1944 until his retirement in 1988.

During his forty-four year tenure with the Chicago Symphony, he took temporary leave in the spring of 1949 to tour England and Scotland with the Philadelphia Orchestra. He was on the faculty of Western State College’s Music Camp at Gunnison, Colorado during the early 1960’s. In June 1962, he had the honor of being the first tuba player invited to play at the Casals Festival in Puerto Rico. Mr. Jacobs, along with colleagues from the CSO were part of the famous 1968 recording of Gabrieli’s music with members of the Philadelphia and Cleveland Orchestras. He was also a founding member of the Chicago Symphony Brass Quintet, appeared as a soloist with the CSO on several occasions, and recorded the Vaughan Williams Concerto for Bass Tuba and Orchestra with Daniel Barenboim conducting the Chicago Symphony. In recognition of his outstanding career, in 2001, the Chicago Symphony’s tuba chair was dedicated as the Arnold Jacobs Principal Tuba Chair, Endowed by Christine Querfeld.

Mr. Jacobs had the reputation as both the master performer and master teacher. He taught tuba at Northwestern University and all wind instruments in his private studio. He was one of the most sought teachers in the world, specializing in respiratory and motivational applications for brass and woodwind instruments and voice. His students include many in orchestras and university faculties around the world.

Mr. Jacobs gave lectures and clinics throughout the world. During the CSO’s 1977 and 1985 Japanese tours, Mr. Jacobs presented clinics in Tokyo. In January 1978, he lectured at Chicago’s Michael Reese Hospital about playing wind instruments for the therapeutic treatment of asthma in children. He presented masterclasses at Northwestern University for a week each summer from 1980-1998. The Second International Brass Congress presented its highest award to him prior to his lecture to them in 1984. In 1991 he presented a clinic for the United States Marine Band in Washington D.C. He presented masterclasses as part of the Hearst Scholar program at the University of Northern Iowa and the Housewright Chair at Florida State University.

The Midwest Clinic presented Mr. Jacobs their highest award, the Medal of Honor in 1985. In 1994, The Chicago Federation of Musicians awarded him for Lifetime Achievement at the first Living Art of Music awards. During his eightieth birthday celebration in 1995, he presented a lecture to the International Brassfest at Indiana University and the International Tuba-Euphonium Conference at Northwestern University. Northwestern’s School of Music presented him the first Legends of Teaching award. Mayor Richard M. Daley proclaimed June 25, 1995 as Arnold Jacobs Day in the City of Chicago.  Mr. Jacobs was given an honorary Doctor of Music degrees from the VanderCook School of Music in 1986 and DePaul University in June of 1995