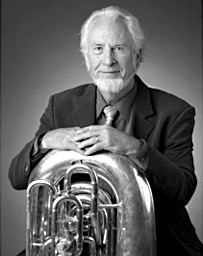 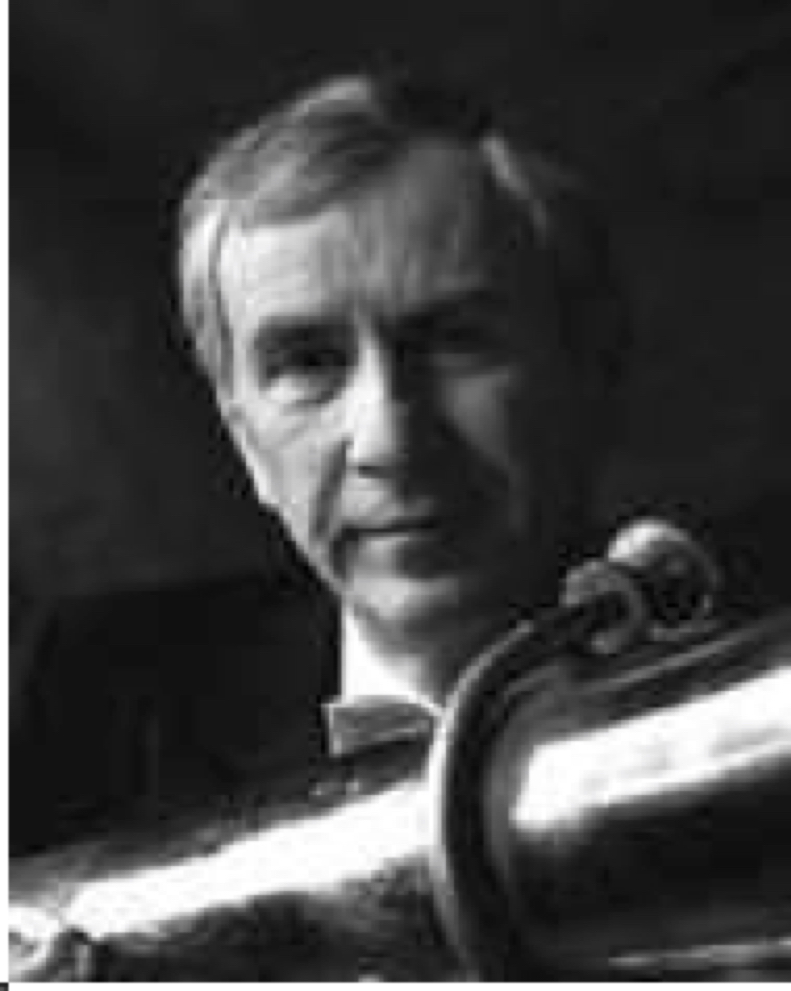 Robert LeBlanc was raised in Port Arthur, Texas, and attended Lamar University in Beaumont, where he studied with trumpeter Richard Burkart. After graduating from Lamar, Mr. LeBlanc attended the Eastman School of Music on an Orchestral Scholarship, studying with trombonist Donald Knaub and earning an M.M. in music education.  Mr. LeBlanc also studied privately with Arnold Jacobs.

Mr. LeBlanc taught in the Dayton, Texas public school system for several years, and then returned to upstate New York where he was Director of Instrumental Music for the Oneonta public schools, performed in, and was assistant conductor of the Oneonta Symphony Orchestra, and taught at Hartwick College.

His administrative responsibilities included Chairman of the Faculty Committee from 1973-1975, Head of the Brass Faculty from 1973-1976, and Chairman of Music Performance from 1976-1989.  He also taught as Visiting Professor of Tuba at the University of Michigan from 1995-1996.

Beginning with his introduction to the Sousaphone in 8th grade in Port Arthur, Texas, LeBlanc describes his educational experiences in Texas, New York, and with Arnold Jacobs in Chicago.  As an undergraduate, LeBlanc was fortunate to locate a 1927 York CC tuba, and it has been the only instrument he used (or needed) for his entire career.

At Lamar, LeBlanc studied composition with Paul Holmes, who wrote the solo Lento for LeBlanc’s graduation recital.  Holmes also composed a tuba trio with band accompaniment for LeBlanc, and fellow Burkart students J. Lesley Varner, and Toby Hanks, which was performed at a Texas Music Educators Conference and is, as yet, unpublished.  Mr. LeBlanc earned his master’s degree from the Eastman School of Music and discusses his experience there, some of his fellow students,  and Donald Knaub’s teaching.

While living in Texas, and in later years, LeBlanc would travel to Chicago to study with Arnold Jacobs.  Leblanc comments on Jacobs’ pedagogical techniques, and on some of Jacobs’ Chicago Symphony colleagues.  One trip to Chicago coincided with the Chicago Symphony’s recording Alexander Nevsky with Fritz Reiner, and LeBlanc’s lesson took place in a room behind the stage, during a session where Mr. Jacobs was not required.

Mr. LeBlanc speaks of his own teaching style, and his many students, who include: Fritz Kaenzig, James Akins, Mickey Moore, Jeffrey Rideout, Jan Duga,  Charles Schulz, John Jones, Scott MacMorran, Steven Bryant, and Steven Winteregg, a number of whom returned to O.S.U. to perform at a concert in honor of LeBlanc’s quarter-century of teaching.

In retirement, LeBlanc plays in a Dixie band, is building a very elaborate stereo system, and breeds and shows Border Terriers and Labrador Retrievers.

Ron Bishop is currently a faculty member at the Cleveland Institute of Music and the Oberlin College Conservatory of Music. He stresses the tuba’s lyrical quality and special sound and feels strongly about changing the misconception that the tuba is an “oom-pah” instrument. To younger students, he has recreated the role of “Tubby the Tuba” and demonstrates the genealogy of the instrument by playing sea shells, animal horns, a cardboard tube, a plastic golf club holder and a vacuum cleaner hose. Ron began studying tuba when he was seven, towing it to lessons in his red wagon. His music teacher, Elizabeth (Betty) Hamilton, greatly influenced his choice of instrument and love of music.

In college, Ron excelled in both music and athletics. A New York state diving champion, he earned a Bachelor of Music degree and a Performer’s Certificate from the Eastman School of Music, and a Master of Science degree from the University of Illinois. He has studied with Roy Thrall, Donald Knaub, Robert Gray, and the late Chicago Symphony Orchestra tubist Arnold Jacobs.

Ron has performed as a soloist with the Cleveland Orchestra, the Buffalo Philharmonic, the San Francisco Symphony, the Cleveland Chamber Symphony, and the Heights Chamber Symphony Orchestra. He has appeared in numerous recitals and clinics throughout the United States, Canada, New Zealand, Japan, and the United Kingdom. He has written extensively concerning the tuba and the arts in general, published in the tri-lingual "The Brass Bulletin", "Arnold Jacobs: Legacy of a Master", and he was an associate editor for the "T.U.B.A. Journal" among others. He is also an avid supporter of, and performer with, Performers and Artists for Nuclear Disarmament.
From: International Tuba Euphonium Association Honorary Life Members

Ronald Bishop (1934 – 2013), a native of Rochester, New York, was raised in Rochester, New York, and began playing the tuba at the age of seven.    He earned degrees in music education from the Eastman School of Music (bachelor’s) and the University of Illinois (master’s), and he was a member of the United States Army Field Band.    After his time with the Field Band, he won positions with the Buffalo Philharmonic, the San Francisco Symphony, and the San Francisco Opera.    In 1967 he followed Chester Roberts as principal tubist of the Cleveland Orchestra, a position he held until his retirement in 2005.   He performed on the legendary “Brass of Three Great Orchestras” recording that involved brass colleagues from the Cleveland, Philadelphia, and Chicago Symphonies.   (Tuba colleagues on that recording – also Lifetime Achievement Awardees – were Arnold Jacobs and Abe Torchinsky.)  He was an influential educator and held positions at the Cleveland Institute of Music, Oberlin Conservatory, and Baldwin-Wallace College.    His former students hold major positions in orchestras, military bands, and as professors in colleges and universities across the U.S. and around the world.   A champion of new music, Mr. Bishop regularly commissioned new works and sought out new works written for others and brought them to both local and international audiences.    Over the years he wrote informative articles for a variety of media, including the TUBA Journal.   Mr. Bishop received the Lifetime Achievement Award at the International Tuba – Euphonium Conference held at the University of Arizona in 2010.

BISHOP, Ronald T. 1934 - 2013 Principal Tuba, The Cleveland Orchestra, 1967 - 2005 The family is saddened to announce the passing of musician and educator Ronald T. Bishop from complications related to Myeloma and Leukemia in Cleveland on 25 July, 2013. He is survived by his beloved wife of 48 years, Marie (Milburn), son Christopher and Sharon (Sirois) of Boca Raton, FL and beautiful granddaughter "Isabella" who will forever remember her loving "Poppa". He also leaves his brother: Larry (Ellie) in San Francisco, his sister-in-law, June (Milburn) and Vincent Dupuis of Courtenay, BC., with many friends in the music community and on Vancouver Island in BC, Canada. Ron met the love of his life Marie Milburn of Victoria, BC, a violinist when they both worked in San Francisco in 1965-66. He was with the San Francisco Opera Orchestra, and Marie was Kurt Adler's Admin Assistant. Ron will be remembered as a devoted husband, father, brother, brother-in-law, and friend to all who had the good fortune to know him. His personally developed skills extended from the diving board to his canoe, to his golf clubs and even a stint as crew on a west coast salmon troller, where he provided foghorn services on tuba. But his greatest professional success came in music. Ron had a lifelong passion for playing the tuba He began at 7 years of age, when the tuba weighed almost as much as he did! He would tow it behind him on a little red wagon to lessons. But his interests and talents were diverse. In college, Ron excelled in both music and athletics. A New York state diving champion, Ron earned a Bachelor of Music degree and a Performer's Certificate from the Eastman School of Music and a Master of Science degree from the University of Illinois. Ron became one of the most influential and respected tuba performers in the world, He performed as principal tuba and soloist with the world-renowned Cleveland Orchestra for 38 years. He was personally invited to Cleveland in 1967 by their internationally respected conductor George Szell. He played and recorded under every conductor since then. He also served as a member of the Buffalo Philharmonic Orchestra, the San Francisco Symphony, the San Francisco Opera Orchestra - where he met Marie - and the United States Army Field Band. As an internationally acclaimed artist, Ron appeared in numerous recitals and clinics throughout the United States, Canada, New Zealand, Japan, and the United Kingdom. He authored extensively concerning the tuba and the arts in general, published in The Brass Bulletin, "Arnold Jacobs: Legacy of a Master", and was an associate editor for the T.U.B.A. Journal among others. He was also an avid supporter and performer with the Performers and Artists for Nuclear Disarmament. Ron shared his vast knowledge and skill, teaching and inspiring countless students while on the faculty of both the Cleveland Institute of Music and the Oberlin Conservatory of Music. Ron continued to teach on these faculties throughout his illness until the end of their school year in Spring 2013. In counterpoint to his astonishing professional achievements, a special part of "The Bishops" lives was spent in their rustic, self-made "Cabin" on Ruxton Island in the Gulf Islands of Canada's West Coast. Ron and Marie found their property by canoe in 1966 and erected their cedar cabin there in 1967. Prior to the Cleveland Orchestra's Blossom Festival Summer Season "The Bishops" always insisted on spending a month on 'the Island'. For years, Ron could be heard practicing his "Tuba on the Rocks" preparing for Blossom. Their son, Christopher, grew up spending many childhood years on the rocks and in the water with his "Pa". Marie and Ron even spent time on their last visit there in 2012, both fighting health issues, but allowing nothing to keep them from "their Island" At Ron's request there are no services planned at this time and his ashes will be spread near their cabin on Ruxton Island, BC. All who were privileged to encounter his charismatic charm and/or perform in collaboration with him in the concert hall will forever and fondly remember Ron Bishop.