In the history of music, advances in performance virtuosity and the rising proficiency level of entire generations of instrumentalists have always had corresponding breakthroughs in instrumental design and manufacture. To make such progress possible, the artisan must work closely with the artist to fashion an instrument that enables a higher level of musical performance.

Peter Hirsbrunner (1925 - 2009)  In the middle of the 20th century, when it was not economically advisable to do so , Peter Hirsbrunner, Sr. envisioned the design and manufacture of better tubas and euphoniums to be used around the world. Surely the financial rewards would have been greater if his efforts were focused on other areas of the brass family. To satisfy a performance world divided into national schools that included different tonalities and designs of contrabasses and bass tubas, as well as euphoniums of radically different construction, he would have to commit much of his time, expertise, and resources. For over 30 years Peter Hirsbrunner, Sr. visited and hosted the virtuosi and pedagogues of the world, listening to their frustration and creating customized solutions. These improvements became prototype designs, which eventually led to improvements in the manufacturing of all types of tubas and euphoniums.

For his consistent, unwavering commitment to the improvement of our world as tuba and euphonium instrumentalists, we bestow upon Peter Hirsbrunner, Sr. our highest honor: the Lifetime Achievement Award of Tubists Universal Brotherhood Association. 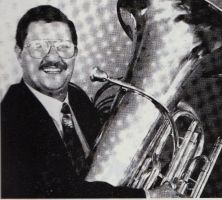 This is a picture of Peter Hirsbrunner, Jr, born in 1954. His bio from the 1998 Army Conference: Peter Hirsbrunner comes from a long ine of manufactuers of musical instruments. His family can trace its instrument-making relatives back to Christian Hirsbrunner who in 1748 became titled as an instrument maker. Born in Sumiswald, Switzerland in 1954, Peter Hirsbrunner took an early interest in the family business and earned his diploma as a tool and diemaer in 1974. By 1982, at the age of 28, he became a full partner in his family's company, having earned degrees in commercial business and instrument manufacturing. The Hirsbrunner company was established in 1847 and since the 1970s has become internationally known fo rits production of tubas and euphoniums. The first Hirsbrunner rotary CC tuba was marketed internationally in 1976. Since that time Peter Hirsbrunner introduced the first copy of the CSO York CC tuba in 1980, the first piston front action E-flat and BB-flat tubas with automatic compensating systems in 1994, and the first piston front action F tuba with an automatic compensating system in 1997.