Roger Bobo (b.1938) is among the most widely recognized musical artists of the last half of the 20th and early 21st centuries. We are fortunate that his musical voice has been the tuba. A native of southern California, he attended the National Music Camp during his high school years and went on to study at the Eastman School of Music. He was among the first tuba artists to present a solo recital at Carnegie Hall in the early 1960s and his first recording (“Roger Bobo Plays Tuba” for Crystal Records) influenced countless young tuba artists at a time when there were only a handful of solo tuba recordings available. Mr. Bobo performed with the Rochester Philharmonic (1956 – 1962), the Royal Concertgebouw Orchestra in the Netherlands (1962 – 1964) and the Los Angeles Philharmonic (1964 – 1989). While in Los Angeles, he also worked in the film music industry from time to time and regularly taught lessons at his home, influencing an entire generation of tubists. Upon his retirement from the LA Philharmonic, Mr. Bobo worked as an educator and conductor in Europe, Japan, and (most recently) Mexico. He retired from public performance in 2001, leaving an impressive bibliography of influential recordings and having inspired numerous composers to write new and challenging repertoire.  As of 2017, he remains in demand as a teacher and presenter of master classes world-wide.

The first brass sounds Roger Bobo heard took place while perched on his father’s
shoulders on a crisp December morning, listening to a brass choir perform Christmas carols
outdoors from a church tower. The first sounds he made on a brass instrument happened when
he was six years old and were not on the instrument he would go on to champion, but rather the
cornet. His father, an amateur multi-instrumentalist, provided the instrument and initial
instruction. As is many times the case in circumstances surrounding father-son conquests, this
effort soon proved a failure and Roger quickly put the cornet down, refusing to play.
A few years later, after returning to the trumpet in his middle school music program, he
would join his fellow band mates on a tour of the district high school band facilities. Recalling
the event:

I walked in there and I saw this sousaphone — we were told, of course, never to
touch anything — I was inside that thing within thirty seconds and understanding
its function perfectly. Two octaves lower than the cornet. I understood it fully and
I played pieces I knew, which were the Syncopated Clock and a Hawaiian piece
called Sweet Leilani. I played it and it drew a crowd. I was experiencing success
for one of the first times of my life.

With a new instrument in hand and a captivating experience behind him, he advanced
through his school ranks quickly. Bobo was enrolled at Eagle Rock School District in Los
Angeles. He received his earliest public school music training from the district’s instrumental
music director, Fred Rupp. Rupp, who taught at Eagle Rock for nineteen years from 1938 to
1957, made a great impact on Roger Bobo: “[Rupp] changed my life. He put the tuba in my
hands in 1951…I remember clearly, he said, the tuba tone should be like a silk ribbon of sound, always beautiful and never blasty.” In high s 5 chool, Bobo performed in the Peter Meremblum
California Junior Symphony, where he met Peter Christ, who was the ensemble’s oboist. In 1966,
Christ founded Crystal Records, an important American recording company, with which Bobo
would record his studio solo albums. Also performing in the Junior Symphony, on trumpet, was
Thomas Stevens (1938-2018), who later played principal trumpet in the Los Angeles
Philharmonic Orchestra, as Bobo’s colleague, from 1972-1999. In 1989, Stevens wrote the
popular tuba solo Variations in Olden Style, dedicated to “Bozo the Great.”

Around this time, Bobo also began studying with Robert Marsteller (1918-1975) who
served as principal trombone of the Los Angeles Philharmonic and Hollywood Bowl Orchestra
following similar posts in the National Symphony Orchestra and in the Navy during World War
II. Marsteller was a dedicated teacher who developed pedagogical materials and wrote
arrangements that are still widely used today. He is also the namesake of the International
Trombone Association’s annual Robert Marsteller Tenor Trombone Competition, a solo
competition for trombonists ages 22 and under that has been running since 1986. Bobo also
credits the friendly competition of his colleague and dear friend, Tommy Johnson (1935-2006),
for helping to develop his craft during his formative years. Johnson (also a student of Marsteller)
became a legendary first-call Hollywood studio musician, playing tuba on more than 2,000
soundtracks beginning in 1958 (perhaps most notably, Johnson performed on John Williams’
Jaws, a soundtrack that gave the terrifying shark theme to the high-tessitura of the solo tuba - and
is heard almost immediately in the film’s opening credits)

In the summers of 1954, 1955 and 1956, Bobo traveled to northern Michigan to study and
perform at Interlochen (known then as the “National Music Camp”) where he was soon regarded
as “the boy who played tuba like a cornet.”In his first year at the camp (the summer between
his freshman and sophomore years of high school), Bobo performed in the High School
Orchestra (five weeks as principal tubist), the Honors Orchestra, the High School Band (principal
tubist, four weeks), and the Brass Choir. The following summer, he unsuccessfully participated
in the camp’s concerto auditions on July 26, 1955. On that audition, he used the new Vaughan
Williams Tuba Concerto (almost exactly one year after the world premiere, and months prior to the U.S. premiere by Bill Bell ). On August 21st, 1955, at 12 the Final Assembly Awards, Bobo
received the Foster Foundation Scholarship for the 1956 summer, “awarded to outstanding high
school boy musicians who also have good records in campmanship and leadership.”

Upon arriving at Eastman in the fall of 1956, Bobo auditioned for and won a position
with the Rochester Philharmonic Orchestra (Erich Leinsdorf, conductor). He played in that
orchestra through his studies in Rochester, and worked with guest conductors (in addition to
main conductors Leinsdorf and Theodore Bloomfield) such as Pierre Monteux, Howard Hanson, George Solti, Max Rudolf, and Leopold Stokowski. He studied with Don Knaub18, bass
trombonist of the Rochester Philharmonic. Bobo remarked of his studies: “I wanted to play tuba
just like he played bass trombone, in a symphonic way.”19 Bobo also performed with Emory
Remington’s famous trombone ensemble on the contrabass trombone (an instrument he had
acquired from William Bell). He was a member of the Eastman Wind Ensemble, and performed
with that ensemble from the fall of 1956 to the spring of 1961. During those years, Bobo
recorded with that ensemble on many of their now-classic albums including: Hindemith/
Schoenberg/Stravinsky, March Time, Winds in Hi-Fi, Hands Across the Sea, British Band
Classics - Vol. II, American Masterpieces for Concert Band, Diverse Winds, Sound Off!, Ballet
for Band, Wagner for Band, The Civil War I & II, The Music of Andrea and Giovanni Gabrieli,
and Sousa on Review. On Fennell, Bobo recalls: “He taught ensemble. He was into it with his
whole heart and soul.”

Roger Bobo performed the first tuba recital ever given at Carnegie Recital Hall on March
31, 1961, organized by friend and then-impresario, Fred Lieberman. The Carnegie recital
generated positive reviews, immediate status in the small but quickly growing tuba community,
and even conjured a poem by John Updike titled Recital.27 Updike wrote the poem in response to
a New York Times concert review headline that read “Roger Bobo Gives Recital on Tuba”.

In February 1964, Bobo was invited to audition by Zubin Mehta for the principal tuba
chair with the Los Angeles Philharmonic Orchestra. The audition took place in Paris. Bobo was
accompanied on this audition by famed pianist, Arthur Brendel and they performed parts of the
Vaughan Williams Tuba Concerto. On that winter morning, he forgot his mouthpiece at his hotel
and had to return to retrieve it, a mistake that forfeited his warm-up time and caused a late start
to the audition. Following a rough start, “eventually, things began working well half way through
the Romanza.” At Mehta’s invitation, Bobo returned to his home town of Los Angeles and for the next 25 years would be the anchor of an American orchestral brass section that rivaled that of
the Chicago Symphony Orchestra. 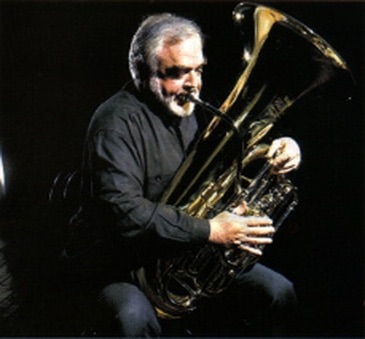 Roger Bobo on The Tonight Show with Johnny Carson. (1970s)