Earle L. Louder has been acclaimed by colleagues around the world as one of the finest euphonium virtuosos of all time. In addition to his performances with the New Columbian Brass Band, Louder is the assistant conductor and soloist with Leonard B. Smith's Detroit Concert Band. He has also appeared as principal euphonium and featured soloist with Keith Brion's New Sousa Band in concerts throughout the United States.

Louder achieved national prominence during his tenure with the United States Navy Band in Washington, D.C. As a member of the Navy Band, Louder served as Head of the Brass Department and euphonium soloist for 12 years.

Louder completed his undergraduate work at Michigan State University, where he studied with the renowned euphonium artist, Leonard Falcone. He earned his doctoral degree at Florida State University, and achieved the distinction of being the first person ever to complete the Doctor of Music degree in Euphonium Performance .

Since leaving the Navy Band, Louder has been resident artist and Distinguished Professor of Music at Morehead State University in Kentucky. He is in great demand nationally and internationally as a guest euphonium soloist, clinician, adjudicator, and conductor.

Before going to Morehead State University, Dr Louder was, for twelve seasons, principal and featured euphonium soloist and Head of the Brass Department of the "World Famous" UNITED STATES NAVY BAND in Washington, D.C., where he also conducted the Navy Band Ceremonial Unit and was stand-by conductor for several national concert tours. Before going to the Navy Band, he was principal euphonium and assistant conductor of the 46th INFANTRY DIVISION BAND of the Michigan National Guard of the United States.

Dr. Louder completed his undergraduate studies at Michigan State University under the guidance of the renowned euphonium teacher and artist, Dr. Leonard Falcone. His doctoral degree work was completed at Florida State University, from which he holds the distinction of being the first person to complete the Doctor of Music degree in Euphonium Performance. He is one of those rare individuals who professionally performs on all three low brass instruments...trombone, euphonium, and tuba.

Dr. Louder is in great demand as guest euphonium artist, clinician, adjudicator, and conductor, nationally and internationally. His performances have taken him throughout the United States, Canada, Europe, Japan, and South America. He is acclaimed, around the world, as one of the finest euphonium virtuosos of all time.

Above: circa 1952 at Michigan State University

Above: 1980 Performance of Lyric Suite by Donald White with The U.S. Air Force Band of the West.

Above: David Miles and Earle Louder discuss music in the U.S. Navy with Marshall Hawkins. 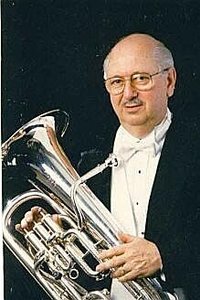