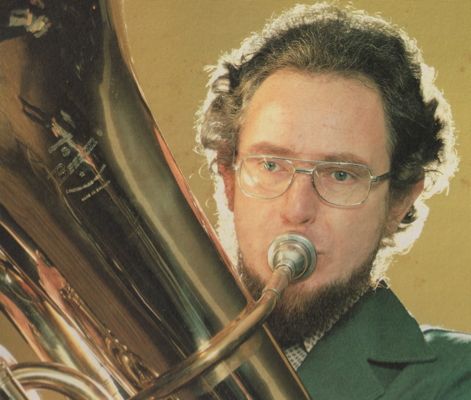 Flight of the Bumblebee

The late John Fletcher (1941-1987) is England ’s most celebrated tuba player. John was known to his closest colleagues simply as “Fletch.” He was best known as the Principal Tubist with the London Symphony Orchestra and also the Philip Jones Brass Ensemble. It is fortunate that his artistry with the LSO and PJBE is documented on many recordings. Probably the most well-known of Fletcher’s LSO recordings is his performance of the Vaughan Williams Concerto in F Minor for Bass Tuba and Orchestra (RCA- 60586).

Although virtually all PJBE CDs include excellent representations of his playing, probably the first one to acquire would be the double CD Philip Jones Brass
Ensemble—Greatest Hits (Decca- 467746). Mr. Fletcher also published a number of solos and ensembles

John Fletcher was awarded the coveted Lifetime Achievement Award by the International Tuba-Euphonium Association (I.T.E.A.). A book entitled A Celebration: John Fletcher Tuba Extraordinary was published in 1997. There is also a CD of his playing entitled The Best of Fletch. Additional information about Mr. Fletcher also appears in the book The Odyssey of The Philip Jones Brass Ensemble, published in by Editions BIM in 1986

More information about Fletcher may be found at http://www.johnfletcher- tuba.co.uk/. [site may not be currently online]. The site includes a number of nice photographs, information about the book and CD mentioned above, as well as the John Fletcher Trust Fund.

Excerpt from The Modern Trombone, Tuba and Euphonium Player:

British tuba player. Born in Leeds, England, John Fletcher played tuba as a youth and French horn while studying natural sciences at Pembroke College, Cambridge. He joined the BBC Symphony Orchestra (London) in 1964 and played a large bore tuba in 13-foot E-flat. At that time, most British orchestral tubists played a 12-foot F tuba, which blended well with the narrow bore trombones (including G bass trombone) that were commonly in use. Fletcher’s advocacy of the E-flat tuba, and later a contrabass tuba in 16-foot C, coincided around the time that larger bore American-made trombones began entering British orchestras as a result of the end of a trade embargo (active from 1938-1958) that had kept foreign-made musical instruments out of the British marketplace. Fletcher joined the Philip Jones Brass Ensemble in 1966 and the London Symphony in 1970 where he played until his untimely death from a cerebral hemorrhage at the age of forty-six. Fletcher’s recording of the Tuba Concerto of Ralph Vaughan Williams (London Symphony, 1972) is widely considered to be one of the finest ever made.

John Fletcher recording of the Vaughan Williams Concerto for Tuba